EICMA 2015 kermesse has come to a conclusion since some days by now: this exhibition is an international reference point both for cycles and motorcycles. Also this year, MALOSSI has shown several news at its stand.

Let’s start with the 2016 specialty: the Yamaha/Minarelli RC-One.
Up today, our oil sumps were conceived for all scooters firstly equipped with two strokes Piaggio engine of 50 cc. Our technicians have gone too far with a new Yamaha/Minarelli Rc-One in order to join technical solutions with internal and external dimensions for all Malossi RC-One models. 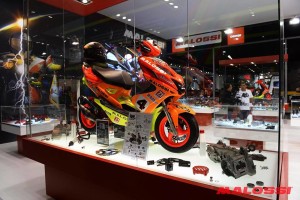 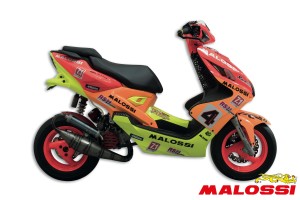 Our new oil sump has been shown to public for the first time at EICA 2015. It has been assembled on a Yamaha Aerox 50 and will be available starting from February 2016 on MalossiStore, provided with all technical information, assembling instructions and spare parts.

Let’s go on with the race world and talk about Piaggio Zip SP, shown at Eicma for the 2016 National Cup of Speed on Scooter and equipped with all new components created to make the vehicle still more imposing during races. Starting from RC-One crankcase it has been ready to include a cylinder of 100 cc but, above all, a longer wheel base between the drive shaft and the clutch shaft in order to make it more and more solid. 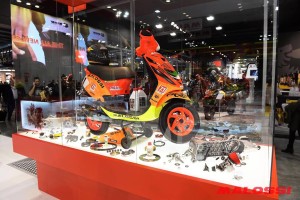 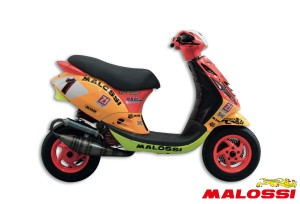 With the new Gorilla Arm vehicle support (only for vehicles with Malossi oil sump MHR C-one/RC-one), Malossi has encouraged motorcycle races to personalize vehicles at unexpected levels, working on the wheel base and on the working corner of the vehicle’s oil sump. Everything is completed with MHR Flanged Mount, created for a competitive use at max levels and provided by the last evolution represented by technology with seven pourings.

But news are great also for Yamaha T-Max 530. The most expected one: the new MHR THROTTLE BODY. 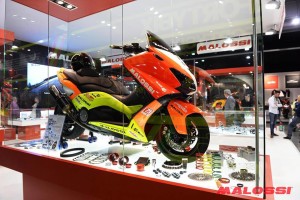 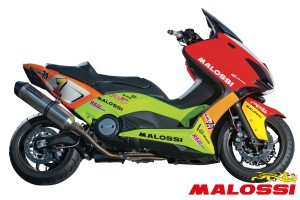 The most performing motors ask for a suitable and always steady fuel supply. We have increased performances of Yamaha T-Max drawing from Malossi complete catalogue and this has made the realization of a specific throttle body as necessary in order to guarantee essential performances for the unit of series. It has been conceived in Ergal 7975-T6 and black anodized aluminium, its diameter reaches 38 mm, while its length remains the same as the original as it can be placed in its series location between head and airbox without difficulties.

But if you have visited us during the exhibition, you have surely admired the Vespa 50 Special, even more special because it has been decorated in spray art by Micheke EnkoCosta : a sole model which joins the sports view of Malossi with the ultimate way scooter model thanks to street art.

But that’s not all: as regards components for Vespa Piaggio, at Eicma 2015 we have shown you, besides the new posterior RS24 shock absorber assembled on Vespa by Enko4, also new mechanisms of HTQ Vespa OX. This couple of primary mechanism has been completely designed again and uses a clutched tooth configuration instead of the series helicoidal ones. They have been applied a further special production that make them very silent!

Henry Favre has been a very appreciated guest at our stand: he is a young man of the Valle D’Aosta and has brought our flag even at Cape North, driving for more than 10.000 km in two months on an Ape Piaggio. 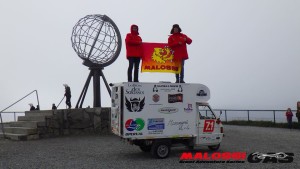 From the beginning, we have supported him in his special adventure through Europe. Taking the cue from his enterprise, we have decided to support your ambitions with the new project Malossi Gas: a sponsoring program through which every year we will award a project in position to embody values of Malossi DNA: seriousness, abnegation and originality.

So, all you can do is follow u sto discover all news!